Objective: Hypertension is one of the common risk factors for cardiovascular and cerebrovascular diseases/disorders A developing country like India faces the double burden of communicable and non-communicable diseases; of the which, hypertension is the most important treatable cause of mortality and morbidity with loss of functional capacity and decline in the quality of life.
Aim: To study the prevalence of end organ damage in the hypertensive geriatric age group.
Method: The present study was a cross sectional study, conducted in 150 elderly patients admitted in MGM Hospital, Navi Mumbai, India with the diagnosis of stage I or II hypertension from 2011 to 2013.
Results: Data analysis of the present study showed that 68% of elderly population aged between 60 to 69 years were suffering from hypertension. Compared to males, females had a higher rate of target organ damage. This study found that out of all patients with total end organ damage, 54.6 % had CVS complications, 15.7 % had hypertensive retinopathy, 25.9 % and 18.51 had raised creatinine and proteinuria respectively. 19.4 % had cerebrovascular accident (CVA) complications. Among Cardiovascular related complications Coronary artery disease (CAD) was found in 21 patients, out of them 7 had Congestive cardiac Failure (CCF). Left Ventricular Hypertrophy (LVH) was the most common complication and seen in 38 patients. 13.8 % patients had Regional Wall Motion Abnormality (RWMA)
Conclusion: The present study concluded that Isolated Systolic Hypertension (ISH) is the commonest type of hypertension in geriatric age group. This study concluded that the most common risk factors of HTN in the elderly are sedentary life style, dyslipidemia and extra salt intake while the most common end organ damage was observed to be Left Ventricular Hypertrophy followed by renal dysfunction.

High blood pressure is one of the most common risk factors for developing both the cardiovascular and cerebrovascular diseases. During the period of epidemiological transition, developing countries might face the double burden of communicable and non-communicable diseases. Of the non-communicable causes, hypertension is one of the most important treatable causes which is responsible to contribute high f mortality and morbidity around the world. Study found that, systolic blood pressure (SBP) continues to rise until 70-80 years of age while diastolic blood pressure shows the increased trend up to 50-60 years for a normal person [1].

High blood pressure among the elderly age group confers almost three to four fold increase in risk for the development of cardiovascular disease, as compared to the younger. Research suggested that hypertension affects more than half of the people who are aged 65 or older, and the prevalence of hypertension and its related complication continues to rise with age [2].

The aim of the study is to find out the frequency of end organ damage among the hypertensive geriatric patients.

The present study was a cross sectional analytic study which was conducted among the 150 elderly patients whose age was above 60 years at MGM Hospital, Kamothe, Navi Mumbai.

End organ damage usually refers to damage occurring in major organs fed by the circulatory system (heart, kidneys, brain, eyes) which can sustain damage due to uncontrolled hypertension, hypotension, or hypovolemia. The present study used the following reference points to conclude the presence of the end organ damage.

For heart: evidence on electrocardiogram screening of the heart muscle thickening up (but may also be seen on chest X-ray) suggesting left ventricular hypertrophy) or by echocardiography of less efficient function (left ventricular failure) [3].

For Kidneys: the presence of leakage of protein into the urine (albuminuria or proteinuria), or reduced renal function [3].

The participants were selected purposively from 2011 to 2013. Geriatric patients who were hypertensive as per the criteria of Joint National Committee 7 (JNC-7) were included [4]. The patients were later classified according to the target organ complication/s. All other patients below the age of 60 years was excluded.

Clinical evaluation was done by using a structured questionnaire which was prepared following the medical condition. Other information collected was as follows: past or present history of angina pectoris, myocardial infarction, transient ischemic attacks, cerebrovascular disease, hypertensive encephalopathy, renal failure and left ventricular failure based on history or medical records. This was followed by a complete physical examination and necessary investigations like Electrocardiogram, Echocardiographic correlations and end organ complications of cardiovascular, cerebrovascular and renal system. Descriptive statistics were used to present the study findings. The participants were further classified in stage I or stage II as per the JNC-7 criteria. Stage I includes the patients whose blood pressure was between 140-159 mmHg. Stage II included patients having blood pressure above 160 mmHg. All the data management, and data analysis was conducted by IBM SPSS software (Version 20.0).

The study proposal was approved by the MGM Medical College’s Ethics Review Committee.

We found significant correlation between SBP (Stage I and II) and end organ complications. 68% of patients with Stage I Isolated Systolic Hypertension (ISH) suffered target organ damage. 78% of patients with Stage II ISH suffered target organ damage. Hence earlier diagnosis and treatment of ISH would reduce target organ damage. Most common clinical presentation was headache (35%), and dyslipidemia (31%) among the study participants. 24% were smokers and 24% alcoholics and 34% patients were taking extra salt diet. We also found significant correlation (p<0.01) between lipid profile and stage I and stage II HTN (table 3).

This study found that out of all patients with total end organ damage, 54.6 % had CVS complications, 15.7 % had hypertensive retinopathy, 25.9 % and 18.51 had raised creatinine and proteinuria respectively. 19.4 % had cerebrovascular accident (CVA) complications. Among CVS related complications Coronary artery disease (CAD) was found in 21 patients, out of them 7 had Congestive cardiac Failure (CCF). Left Ventricular Hypertrophy (LVH) was the most common complication and seen in 38 patients. 13.88 % patients had Regional Wall Motion Abnormality (RWMA) (table 4).

Hypertension is estimated to be the leading cause of current global disease burden and is prevalent in many developing countries, as compared to the developed world. The present literature also suggest the role of low levels of vitamin D, high sugar and fats levels can lead to HTN [5, 6, 7]. Furthermore, it has been proved that HTN could be strongly age dependent which was also observed in Framingham Heart Study [8]. In the present study, there was no significant association between rise in SBP and increase in age. However, there was a positive significant association between end organ complications and increase in SBP and age, thus supporting the results of the previous study [9].

In the present study of 150 patients, there were 94 males and 56 females. Other study found similar male to female ratio, which correlates with our study [10]. In the present study, the most common presentation was headache (35%). We further observed that 13 (8%) patients had a family history of hypertension which other study too had showed as an important determinant of hypertension [11].

In this study only 47 (31%) patients had dyslipidaemia. Another study found dyslipidaemia was present in 55.9% of patients [9]. Due to diagnostic variability there could be different number of patient suffering with dyslipidaemia. Cardiovascular complications (LVH/CAD) in our study was seen in 59 patients. This observation was consistent with one of the previous study [9]. 100 (66%) patients had high SBP as 140 mm Hg and above with normal diastolic blood pressure, out of which 63 (out of those 100 patients {63%}) had at least one target organ damage. The remaining 50 patients had high DBP with normal SBP out of which 39 patients had one or more target organ damage. Oates et al., had found that, more than 40% of the subjects had coronary heart disease, approximately 18% had cerebrovascular disease and almost 10% had chronic renal failure in this study [12].

The previous study reported that high frequency of ISH was present among the elderly hypertensive patients [13]. In one of the studies, 87% patients who developed ISH were in the age of 60 years or above was considered as a category for studying ISH in elderly [9], suggesting age can be an important factor to consider [13, 14, 15].

Limitation of the study

The patients were exposed to drugs or medications; which we did not consider in this study. It was a cross sectional and mono-centric study, therefore, longitudinal and multicentre study are expected to find out the risk factor with end organ damage. We also did not identify the date when the patients were diagnosed as hypertensive. The study also did not differentiate between the mono or multi target organ damage.

The presentation of ISH is the commonest type of hypertension in non-obese elderly age group particularly from urban area which may occur due to common risk factors such as hypertension, smoking, non-healthy food intake, sedentary lifestyle, dyslipidemia and extra salt intake. Most common end organ damage in elderly age group is left ventricular hypertrophy followed by renal dysfunction (in the form of proteinuria and raised serum creatinine levels). Target organ involvement increases with age. Hence, care should be taken to maintain the blood pressure levels in order to prevent the complications for the geriatric group. 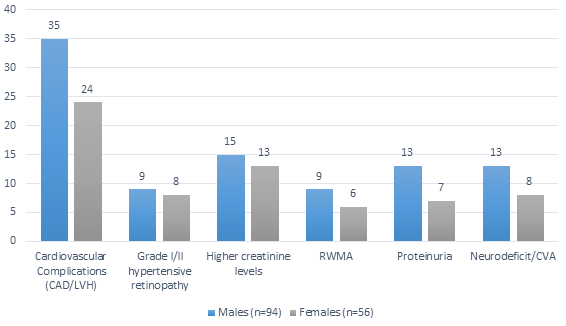