Henoch-Schonlein Purpura (HSP) is one of the most common causes of small vessel vasculitis in children.  A six-year-old female presented with abdominal pain, swelling and rashes over both the legs associated with multiple episodes of vomiting for around ten days. Stool for the occult blood test was positive but there was an absence of hematuria and albuminuria. The case was diagnosed as HSP and treated with dexamethasone for ten days. The patient was finally discharged on the resolution of her symptoms.  Early diagnosis and treatment favor the better outcome in cases without any renal complications.

Henoch-Schonönlein Purpura (HSP), also known as IgA vasculitis is a small vessel vasculitis with IgA1-dominant immune deposits predominantly on capillaries, venules or arterioles. It often involves skin and gastrointestinal system and may also cause arthritis [1]. It is commonly seen in children What is common and what differences do you find in your case with reference to medical literature please do write briefly. and characterized by palpable purpura more commonly located in the dependent body parts like lower extremities and buttocks, arthritis/arthralgia, bowel angina along with hematuria/proteinuria [2]. The various etiology has been suggested like varieties of pathogens, drugs, environmental exposure among which Group A beta hemolytic Streptococcus has been much studied [3].

The natural history of the disease has self-limiting course in most of the cases except that those of renal complications associated with it. Symptomatic treatment with Non-steroidal anti-inflammatory drugs (NSAIDs) along with the steroids will have the joint and abdominal pain relief [4]. Corticosteroids if given in the early course of disease can help to provide a better clinical outcome [5]. The prognosis is good, with exception of renal involvement that may need the follow up till six months or longer [6, 7].

The exact prevalence of HSP in our settings has yet to be discovered but various studies revealed it to be one of the important causes of childhood renal disease [8, 9].

The case is reported after taking informed written consent from the patient’s mother. Six-year-old female presented with the complaints of pain in abdomen, swelling and rashes over the lower limbs associated with multiple episodes of vomiting for ten days. Pain in the abdomen was localized around the umbilicus and was sudden in onset, intermittent in nature, non-radiating and alleviated on lying flat on the bed. She developed swelling in both legs subsequently a day after abdominal pain along with appearance of rashes starting from feet and progressing to thigh and buttocks. She On which day did she develop swelling of both legs? Was it from the beginning or seen later after other clinical features? Which clinical features was presented first please mention in chronological order. It would be easy to understand.Any significant relevant past history, interventions and outcomes. also developed three to four episodes of vomiting in last five days. The vomiting was non-projectile and non-blood stained.

On examination, the general condition of the patient was fair and vitals were stable. The abdomen was soft and non-tender. Mild bilateral non pitting edema was present over both the legs. There was presence of non-tender, non-blanching, purpuric rashes over both lower limbs and extending up to the buttocks.

Diagnosis of HSP was made in accordance with the American College of Rheumatology Were there any diagnostic challenges? If yes what diffulties did you face in diagnosing the disease? and European League Against Rheumatism (EuLAR) and Pediatric Rheumatology Society (PReS) criteria [10, 11].

She was treated with dexamethasone 0.14 mg/kg/dose four times a day intravenously for five days continuously and then tapered to three times a day for three days following by two times a day for next two days.

Henoch-Schonönlein Purpura (HSP) was first described by William Heberden in 1801. Later Schönlein recognized the association between purpura and arthritis whereas Henoch reported a case that also included gastrointestinal symptoms along with the renal involvement [12]. HSP is the most common vasculitis of the children. Half among all the cases occur before the age of five and males are affected twice as common as females [13].

The exact etiology and pathogenesis of HSP is yet to be determined. Seasonal variation has been related with a high prevalence rate in autumn and winter When was your case diagnpsed. Was it similar with that of this case. [2]. However, the case described here was diagnosed in the spring season. It has also been proposed that various triggers like bacterial and viral infections, vaccinations, drugs and autoimmune mechanisms may result in the formation of an antigen and antibody complex and the deposition of such formed immune complex in the small vessels may activate the alternate compliment pathway leading to neutrophil aggregation which results in inflammation and vasculitis [14]. Among all, the preceding infection of β-haemolytic Streptococcus has been one of the most studied cases. The positive throat cultures as well as increased titres of anti-streptolysin O has been often found in many patients [3]. The evidence of prior infection has not been recorded in the present case.

The patient generally presents with the classic tetrad of rashes, poly-arthralgia, abdominal pain, and renal disease. The non-blanching rashes clinically appear as a palpable purpura on the lower legs and arms [13]. The joint involvement is generally characterized by the pain and swelling of the joints, most affecting the knees and ankles. The abdominal pain followed by vomiting and intestinal bleeding are the dominant features involving the gastrointestinal system. Microscopic hematuria and albuminuria are the prominent renal findings [5, 15].

Our case had the symptoms of rashes over both lower legs, pain in abdomen and vomiting. Joint involvement was absent. Significant laboratory finding was occult blood test positive in stool. However, there were no signs of hematuria and albuminuria.

The patient is said to have HSP if at least two of the four above criteria is present. In our case there were presence of palpable purpura, age <20 at disease onset and bowel angina and thus was diagnosed as HSP.

There is a predominantly spontaneous resolution of all symptoms except that of the renal disease in the majority of the cases. Steroids are more often used for the relief of abdominal pain, joint pain and skin disease. Alternatively, methotrexate and dapsone have been quite effective (steroid sparing agent) for the treatment of chronic abdominal pain and skin involvement [4]. The role of the corticosteroids in preventing the long term outcome of renal complications is controversial. A meta-analysis in the Medline database and the Cochrane Controlled Trials Register based on a comprehensive review of the literature by Weiss et al., Plagiarised sentence. Paraphrase/Rephrase it. stated that early treatment with corticosteroid significantly reduces the odds of developing persistent renal disease along with surgical intervention and recurrence [5]. In contrary, other trials and updates in the literature has mentioned that there is no long term renal protective outcome on the early treatment with prednisolone [16, 17].

Generally prednisolone is the commonly used steroid for the treatment of HSP. Though in our case we used dexamethasone, there is no evidence in literature to prove the superiority of one over another. Several cases and studies have been reported resulting in better outcomes on treatment with dexamethasone [18, 19].

The renal involvement has a high morbidity and mortality, otherwise the disease has better prognosis [7]. A systematic review by Narchi H et al., stated that even if urinalysis is normal at the presentation, follow up urine testing should be continued for at least six months as 97 % children will develop abnormal urine findings by that time [6].

Rarely few cases of complicated HSP as intussusceptions, gastrointestinal bleeding and with cardiac involvement have been reported [18, 20, 21].

Henoch-Schonönlein Purpura being one of the most common vasculitis of the children and its classic presentation of palpable purpura, arthritis, abdominal involvement and renal features makes the diagnosis quite easier. Early initiation of treatment with steroids will help in symptomatic relief and bring a positive outcome. The renal disease may need long term follow up; otherwise the diseases has favourable prognosis.

Author would like to acknowledge the patient’s mother for providing consent for the case report. Also authors would like to thank to the faculty of Department of Pediatrics, Gandaki Medical College for their support, guidance and suggestion during the course of study. 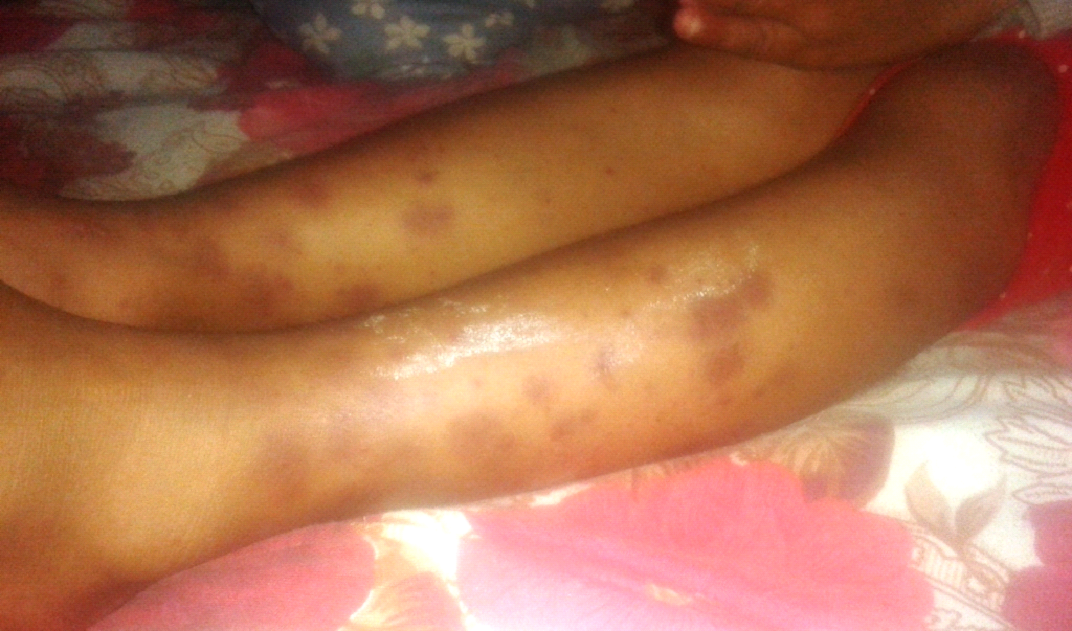