Humility: A Key to get Published

Humility has been little understood despite being an important part of the scientific writing. Many manuscripts with good data remain unpublished due to their lack of humility leading to repeated rejections. This Editorial aims to highlight the importance of humble writing and how it can be incorporated by authors it in their scientific methodology.

Many authors struggle with repeated rejections despite unique research and good English language skills [1]. A common reason for such rejection is the lack of humility in the written language [2]. A question that arises is how can one be humble in scientific writing? Though this is not difficult to learn but a little difficult to practice, especially in scenarios where it is common to ‘bully’ someone to get work done. Humble writing is acquired by humble surrounding and an attitude to not harm.

What exactly is humble speaking or writing? We sometimes believe that stating a word strongly shall have an enormous impact on the readers and reviewers leading to paper acceptance. However, this is not usually the case [2, 3]. The art of paper acceptance is to ‘sell’ your paper with humility. The language should not contain ‘strong’ words lest the manuscript becomes biased.

To mention it with examples:

All these sentences convey the same meaning. However, the first sentence is considered rude while the third one is relatively humble. This is a common way the writing in the manuscript should be attempted. Such language patterns have higher chances of acceptance than a direct one.

All three sentences mean the same thing. However the third sentence is relatively humble. It shall inform an individual about the mistakes as well as not bring down the moral.

How can it be applied to scientific writing?

A common question which comes to mind is how to apply humility to scientific writing. Many authors struggle to get their work humble along with being impactful. A common saying is ‘If you won’t sell your work, no one will buy it’. However, if your work appears too rude during the selling process, no one will ever buy it.

The meaning of all three sentences is same. However, the third sentence seems more humble as compared to the first two and attracts approval from larger number of reviewers.

Using ‘softer’ words during the manuscript preparation is a requisite. Stronger words tend to make the text difficult to read. For example: ‘None of the studies have shown..’ should be replaced by ‘ Few studies have shown’. Though both of the sentences have similar meaning, the first is too strong a sentence to quote.

Another example would be: “We are the only hospital having this facility”.

This is a strong sentence without proper or relevant reference. It should be reframed in a manner “We are one of the few hospitals in the region with such facilities”.

Use of adjectives to various words should be avoided in manuscript writing. Examples:

These two sentences have similar meaning; however the second one is more acceptable.

Humility is always a tough subject for writers as many of us suffer from various insecurities. However, they have a tendency to go from one doubt to other. Writers often have a delusion of being the greatest writer ‘ever lived’, so humility is quite necessary. To be a good writer, one must find a balance between confidence and humility.

Every step of writing and publishing requires humility with one exception for the same. The first draft has to be written being fearless and then one needs to get it down. Humility is again required again while editing. The writers must be able to distance themselves from the words so they are not precious.

Certain long and clunky phrases should be avoided whenever possible. A good vocabulary and thorough reading helps to make the manuscript humble and interesting to read. A list of such phrases and their alternatives has been given in table 1.

The Art of Research and Writing.

The first step in initiating a research project is to collect the publications related to ones work. This may refer to as the stage 1 of ‘researching’. An ‘end note (or similar software)’ file may help in keeping the library and inserting in the manuscript. The second step is to write down the thoughts and ideas. The hypothesis must be written and thought over again and again. Once you come up with a new idea, write that down too. It takes time for an idea to strike and you never know that might be the day when ‘apple fell from tree’ on Newton’s head! It is important to talk to peers, colleagues and juniors. An important thing that differentiates a researcher from others is ‘inquisitiveness’. Having an inquisitive team member shall always take you to heights you may have dreamt of. The next step is to ‘sell’ your idea. By ‘selling’ an idea, I do not mean to get paid for it. It means that the idea must be made popular to others in conferences and meetings so that you get to collaborate with laureates from related field. This does not only help in research but gives an edge over others to get grant awards. A simpler flowchart has been shown in Figure 1.

Once the research is complete, it is important to lay down the first draft with all the thoughts. These thoughts may sound rude and even grammatically incorrect. A manuscript shall never start unless something comes on paper. Once the first draft of manuscript is ready, it must be left for a few days and then re-read to know the rudeness. Review it, re-review it and make is humble. Let others read and criticize you for your language, grammar and ‘not so intelligent’ idea. Incorporate the changes and send to editor and reviewers. Editors and reviewers are often very ruthless when they come across a manuscript as they take out extra ‘unpaid’ time for it. Always welcome their suggestions and thank them for the comments. Try and incorporate their notions into your manuscript. Adding papers from the journal you are planning to submit your manuscript in, shall always give you an edge over others. This may eventually lead to a publication that you had always desired. A simple flowchart for the same has been shown in Figure 2.

Humility is writing is equally important besides good scientific methods and English language skills. A majority of submitted papers lack humble language which is the cause of rejection by reviewers. As it has been rightly said in 1976 by William Zinnser; the secret of good writing is to strip every sentence to its cleanest components. Every word that serves no function, every long word that could be a short word, every adverb that carries the same meaning that’s already in the verb, every passive construction that leaves the reader unsure of who is doing what-these are the thousand and one adulterants that weaken the strength of a sentence. And they usually occur in proportion to the education and rank.

This editorial simply aims to highlight the basics of initiating a research project and writing a manuscript. However, it should be noted that ‘research’ is much beyond simple step by step flowchart. It’s an art which is under-paid and under-appreciated. A researcher does research because he likes it and not because he gets paid for it. Duplicating and fabricating data is the biggest worry that the academicians have and it may prove harmful in the therapy of patients in future. Search, research and re-research; not for the sake of doing it but to do it for the sake of the future generations and making the world a better place to live in. 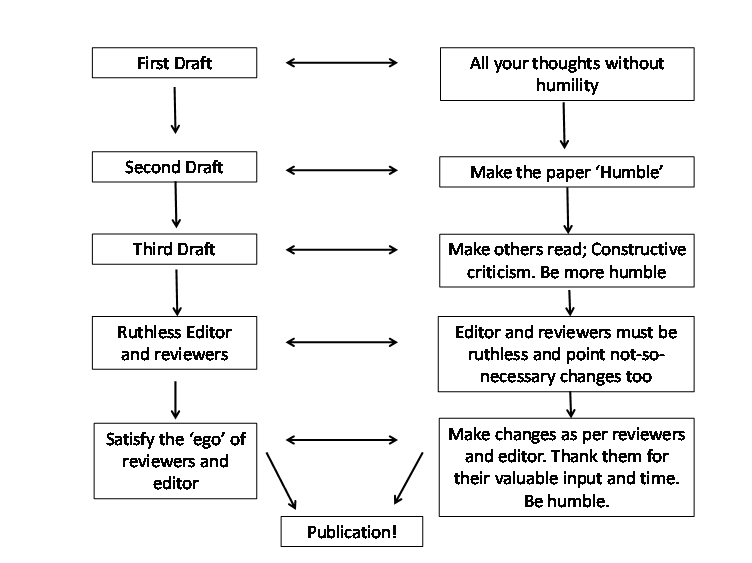