An Association of Total Health Expenditure with GDP and Life Expectancy

The rapid growth of the total health expenditure (THE) has become a topic of major concern in most of the developing countries [1]. A large amount of fund is being exchanged between the households and health care services through service providing agencies. Therefore, out-of-pocket money spending in parallel with governing expenditures to buy the health services, have become a burning concern especially for the third world countries [2]. In such reality, total health expenditure is defined as the sum of both public and private health spending in consideration of the ratio of total population of the country [3]. It covers both the preventive and curative services along with emergency and rehabilitative health services for the entire population [4].

In general, Ministry of Finance of a country allocates the considerable portion of budget for health expenditure in a fiscal year. However, this allocated budget has been reported in different studies as unequal for the developed and developing countries [3]. Other study showed that income has a direct influence on health spending for an individual and therefore, rich people are found to be more concerned about their well-being than the marginalized group [5]. Increased life expectancy has a significant influence on investment in the health-care sector that makes people to buy a good premium of health insurance or spend money directly. In a market-based economy, private investors are willing to finance in establishing medical industry which will be able to provide advanced diagnostic method and modern treatment facilities [6]. As the resources are scarce in developing countries, Ministry of Health (MoH) also depends on foreign aid to ensure the provision of health service coverage for all the citizens. If MoH can increase the allocation of budget in the health sector, individual spending as out-of-pocket expenditure is expected to reduce significantly. Out-of-pocket payments and government health expenditure are not the same where else they have different impacts on financial risk protection [2]. Extra individual expenditures on health can lead to a catastrophic effect on the financial status of the people, especially that of the poor people.

Determination of a country's health spending depends on many factors, in other words, there are priority and non-priority area of a country [7]. Total government spending, as a share of GDP, can be different according to the country’s priorities which depends on capacity to pay and fiscal constraints of a financial year [1]. Demographic aspects like distribution of young-older population, urban-rural ratios, and burden of communicable and non-communicable diseases reflect the amount of needed money for the health system [4]. However, a good health system indicator and application of technology in health care always tend to exhibit a positive impact on health expenditure [8]. Due to technological advancement, reduced maternal and child mortality, and improved health care delivery system; people from most of the countries can enjoy high survival chances [8]. However, life expectancy is also unequally distributed globally. For example, life expectancy is often better in the developed countries, as compared to that of the developing countries. However, increasing longevity might be considered negatively for the economy of developing countries. Elderly population requires an extra care and more sophisticated health-care services, which could result in higher health expenditure. In this context, there exists controversies as to whether health expenditure depends on the overall income of a country or not. Again, it is unknown as to whether an increased life expectancy can influence the health care spending in the developing countries. In the presence of such gap in knowledge, the present study is an attempt to identify an association of the life expectancy with healthcare expenditure and GDP in Bangladesh.

All the analyses were performed using STATA version 13 SE (College Station, Texas, USA). Graphical presentation and descriptive statistics were performed to present the findings. Multivariate logistic regression was carried out to find the association of total health expenditure with life expectancy and GDP. A conventional cut-off value of 0.05 was taken as statistical significance.

Considering the multivariable analysis, the behaviour of Total Health Expenditure (THE) in relation to GDP and Life Expectancy (LE) has been discussed. A priori was considered expecting that both the GDP and LE will have a positive impact on THE.

Thus our proposed econometric model is:

Here, β1 is the intercept and Se is an error or residual value. This equation has considered β2 and β3 as the slope for the independent variable of GDP and LE, respectively.

Where figures in parentheses are the estimated standard errors (Se) . Before the interpretation, we can observe the partial slope coefficient of GDP, namely 0.0432.

The interpretation of these regression coefficients are as follows:

The present study did not find any statistical significance between the life expectancy and total health expenditure in multi variable analysis (p>0.05). Based on findings of other studies, the assumption was made that if the life expectancy of a country increases, the tendency of health care spending will increase [9]. However, the present study contradicts the result of a previous study. Such finding might be attributed to a number of reasons in our study, notably the limited availability of health care data at the macro as well as the micro level.

At this stage, it should be worth mentioning that in determining the income elasticity of health expenditure, the identification of the non-income determinants are essential for avoiding the effect of missing variable. However, this task of identification of the non-income determinants is reported to be difficult for a number of reasons. As an example, one such obstacle is the limited availability of health care data at the macro as well as micro level [4]. The missing variable effect would induce either a downward or an upward bias depending on the sign of correlation between the explanatory and the omitted variables. Moreover, many factors such as income, education, taxation, social security, and user fee depend on health expenditure [7]. It is assumed that more investment in health care delivery system and technological advancement in health science can increase human longevity [11]. Life expectancy can also be increased with improvement in the overall health system particularly focusing on health care of mother and children [12, 13]. In such context, collective effort is essential to bring the positive change in health financing and health expenditure throughout the health system by ensuring a good public health leadership [14].

From the literature point of view of the Organisation for Economic Co-operation and Development (OECD) countries, the health expenditure per capita on GDP consistently showed that income elasticity ranged between 1.20 and 1.50 [15]. Several studies conducted in OECD countries used the panel data and found that income elasticity is larger if it is more than 1.00 for a country [16]. However, contradictory results also exist. One study did not find any significant relationship with the government health expenditure and the share of annual GDP [17]. Farag et al. (2009) examined the panel data from 1995 to 2006 which were derived from 44 countries where he found that 1% increase in GDP was associated with 0.66% increase in government health expenditure for the developing countries and 0.96% increase for the middle to high-income countries. Therefore, GDP could be considered as a function of healthcare expenditure [6]. If we consider health as a component of human capital along with education, it might show us the reverse causation.

According to Wagstaff (2009), there are at least two mechanisms through which GDP can act as a function of healthcare expenditures [18]. Firstly, if the health expenditure is regarded as an investment in human capital, and this human capital could generate a good source of income. Consequently, this revenue would ultimately increase the health care expenditure which in turn might propel the GDP higher. Secondly, healthcare expenditure could shape the health system in such a way that every citizen could enjoy relatively good health and it could have transformed the human capital in producing labour supply and productivity. Finally, there are many predictive factors such as income, technological prosperity and variety in medical services and health system characteristics which need to be considered in calculating the total health care expenditures [19]. Although income shows positive relation to health care expenditure, the conclusion regarding the elasticity of revenue is not yet very much certain [20]. However, results from the previous studies showed that when GDP increases, health expenditure in general increases [7]. It is also quite evident that total government spending as a share of GDP has a positive association with the financial health budget.

Limitations of the study

Though, there was a lack of available time series data of recent years at the time of analysis, availability of 10 fiscal year data from 1996 to 2006 allowed the unique opportunity to explore the factors associated with health expenditure in Bangladesh. However, certain limitations remained and thus, results should be interpreted with great caution. The variables included in this study were still limited and some important variables were missing. Health system characteristics, such as the provider payment mechanisms and the degree of private provision of the services were not included in the study due to the lack of adequate time series data. Finally, some methodological issues remained problematic and challenging, that might imply new scope in analysing the panel data in future.

We are grateful to the Government of Bangladesh to give us the permission in using the secondary data from Bangladesh Health Bulletin and Sample Vital Registration System. 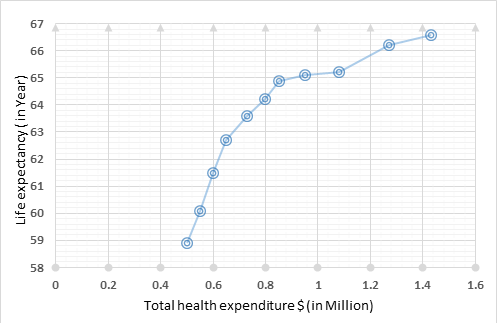