Association of Thyroid Stimulating Hormone and Lipid Profile in Pregnancy

Introduction: Thyroid hormones have significant functions in embryogenesis and fetal development. Evidence suggests that thyroid stimulating hormone (TSH) may exert extra-thyroidal effects and modify the profile of blood lipids.
Aim: To determine the association between maternal blood lipid profile and thyroid stimulating hormone in second and third trimester of pregnancy.
Methods & Materials: The present study was carried out at MGM Hospital, Navi Mumbai, India. 200 antenatal cases from October, 2012 to October 2014 were enrolled after taking an informed consent. The blood samples for Thyroid stimulating hormone and lipid profile were taken at 16th and 32nd weeks.
Results: The mean TSH level in second trimester was 1.53 mIU/L, with a standard deviation of 1.147 mIU/L. In third trimester, the mean TSH level was increased to 2.60 mIU/L with a standard deviation of 0.836mIU/L. The t-stat value was found to be -10.649 (p < 0.001). In third trimester, TSH was negatively correlated with Cholesterol (r= -0.214, p < 0.01) and VLDL (r= -0.148, p < 0.05).
Conclusion: TSH levels rises according to the gestational age, being higher in third trimester as compared to second trimester. There is a significant negative correlation between TSH levels and cholesterol & VLDL in third trimester of the pregnancy. Hence, TSH levels should be looked for, especially in third trimester, in order to keep the thyroid related problems in check.
Keywords: TSH Lipid Profile Pregnancy

Thyroid hormones have important functions in embryogenesis and fetal development [1, 2]. It is widely known that thyroid function undergoes many significant changes during pregnancy [3, 4, 5].

The size of the thyroid gland remains however normal during pregnancy. Thus, the presence of goitre should always be investigated. A meta-analysis of various available studies of thyroid gland’s size and function in pregnancy found out that thyroid size, when estimated by inspection and palpation or measured by ultrasonography (USG), increased only in iodine deficiency, and the increase in glandular size remained within the normal range [6].

Controlled hyper-stimulation of the ovaries with exogenous gonadotropins (for in vitro fertilization) resulted in a rise of serum Thyroid Binding Globulin (TBG), Thyroxine (T4), and triiodothyronine (T3) concentrations while there was a fall in serum free T4 concentration, and a small rise in serum TSH concentrations (usually within the normal range) [7].

Thus, total T4 and T3 concentrations generally, rise during the first half of pregnancy, however plateauing at approximately 20 weeks of gestation is seen, and then a new steady state is reached and the overall production rate of thyroid hormones returns to pre-pregnancy rates. Thus, TBG excess leads to an overall increase in both serum total T4 and T3 concentrations.

Also, TSH levels are usually suppressed due to very high levels of Human chorionic gonadotropin (hCG) during the first half of the pregnancy, especially the first trimester. hCG, a glycoprotein hormone which secreted by placenta, shares a common alpha subunit with TSH, hence can act as a weak TSH-receptor agonist [10]. hCG has a mild stimulatory effect on the thyroid gland, and can cause a transient “physiological” elevation of thyroxine (FT4) and free triiodothyronine (FT3) [11]. TSH levels measurement at this time therefore, may not provide a good indicator of thyroid function. Later phases of gestation, it has been suggested, could be more reflective of maternal thyroid status [12].

Thyroid dysfunction without any primary thyroid disease may result in various qualitative or quantitative changes of triglycerides, phospholipids, cholesterol, and other lipoproteins [13]. Dyslipidemia, a consequence of thyroid dysfunction, generally increases the risk for cardiovascular disease [14, 15, 16]. Previous studies have shown that thyroid stimulating hormone (TSH), free thyroxine (FT4) and free triiodothyronine (FT3) are significantly associated with lipid profile in the euthyroid population, regardless of gender [17, 18].

The influence of TSH on lipid profile has been assumed to be mediated indirectly, through its effect on thyroid hormones. However, additional evidence suggests that this association is partially contributed by the direct extra-thyroidal effect of TSH on lipid profile [19, 20]. Normal pregnancy is associated with predicted changes in lipid metabolism and elevation in lipid concentration as gestation progresses [21]. However, these changes are considered to be generally non-atherogenic, and fall sharply to pre-pregnancy levels following delivery [22, 23].

The present study is conducted in order to evaluate the association between thyroid stimulating hormone and lipid profile in Indian normotensive pregnant women.

In brief, the present study was conducted at MGM Hospital, Navi Mumbai, India. 200 antenatal cases from October, 2012 to October 2014 were enrolled after taking an informed consent. Out of the 200 subjects, 10 developed GHTN in late third trimester which was detected after 32nd week during follow-up which were also included. The venous blood sample was collected from all the patients for measurement of lipid and thyroid profile in the 16th week and 32nd week of gestation for analysis.

All pregnant women with a singleton pregnancy with a gestational age of 13-28 weeks, irrespective of parity and gravida were included. Pregnant women in whom hypertension (HTN) was detected before 14 weeks and those with diseases or complications like chronic HTN, Obstetric and Foetal Complications (Hydrops foetalis, congenital foetal anomalies), Diabetes, Renal Disorders and Thyroid Disorders were excluded.

Statistical analyses were performed using Statistical Package for Social Sciences (SPSS) version 20. All reported P values are two-tailed, and confidence intervals were calculated at the 95% level. The data was presented using frequencies, percentages, descriptive statistics followed by charts and graphs. Level of significance was set at 5%. All p-values less than 0.05 were treated as significant.

TSH was negatively correlated with Cholesterol (r= -0.214, p < 0.01) and VLDL (r= -0.148, p < 0.05). This indicates that the TSH and Cholesterol, VLDL are directly associated. With increase in TSH level, cholesterol levels decreases. However, they are still within normal range (table 4).

In our study a correlations between TSH and Lipid Profile parameters in 2nd and 3rd trimester was made and we found during second trimester, there is significant positive correlation between VLDL and HDL (r=0.158, p < 0.05).

Biondi and Klein reported increase in means TSH levels overall in pregnancy [15]. While few other studies have exactly opposite [26, 27]. Previous studies have shown that TSH is significantly associated with lipid profile in the euthyroid population, regardless of gender [18]. The influence of TSH on lipid profile has been assumed to be mediated indirectly, through its effect on thyroid hormones. Furthermore, additional evidence indicates that this association is partially contributed by the direct extra-thyroidal effect of TSH on lipid profile [20]. However, non-significant positive association between TC and TSH, TG and TSH observed among pregnant women may support the assumption that TSH directly affects lipid metabolism [19].

Circulatory FT3 levels are inversely influenced by TSH, consequently the negative relationship with TG among pregnant women could also be attributed to low TSH level and the stimulation of lipid metabolism by FT3. Hyperthyroidism is implicated in hepatic endogenous glucose efflux which triggers lipogenesis [28, 29].

TSH level was found to be associated with gestational age in a study. This may be a physiological role of TSH to maintain FT3 level to regulate TG synthesis with respect to gestational age [30]. 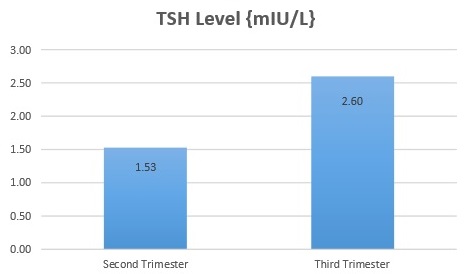