Background: Education level reduces the risk of health problems such as poor self-rated health (SRH), high body mass index (BMI), and depressive symptoms (DS). Marginalization – related Diminished Returns (MDRs), however, refer to smaller health benefits of socioeconomic status (SES) indicators particularly educational attainment for the members of racial minority groups such as non-Hispanic Blacks compared to the majority group (non-Hispanic Whites). It is not known, however, if MDRs also hold for middle-age and older adults over a long period of time.

Methods: Data for this analysis were borrowed from the Health and Retirement Study (HRS 1992-ongoing), a nationally representative longitudinal study that followed 10,023 middle-aged and older adults (50+ years old) for up to 26 years. From this number, 1877 (18.7%) were non-Hispanic Black Americans, and 8,146 (81.3%) were non-Hispanic White Americans. Education level was the independent variable. We used cluster analysis to categorize individuals to low and high-risk groups (outcome) based on SRH, BMI, and DS over 26 years. Age and gender were the covariates. Race was the moderator.

Results: Overall, high education level reduced the odds of poor SRH, BMI, and DS over the 26 years of follow up. Interactions were observed between race and education on all three health outcomes indicating smaller protective effects of baseline educational attainment on poor health over time, regardless of the outcome.

Conclusions: In line with the MDRs, highly educated non-Hispanic Black Americans remain at high risk for poor health across domains, a risk which is unexpected given their education. The risk of all health outcomes, however, is lowest for non-Hispanic White Americans with highest education. Policies that exclusively focus on equalizing racial gaps in SES (e.g., education) may fail to eliminate the racial and ethnic health inequalities because of the racial inequalities in the marginal health return of education. Public policies must equalize education quality and address structural and environmental barriers that are disproportionately more common in the lives of non-Hispanic Black Americans, even at high education levels. Future research should test how contextual factors, segregation, labor market practices, childhood poverty, and education quality reduces the health return of education for highly educated non-Hispanic Black Americans. 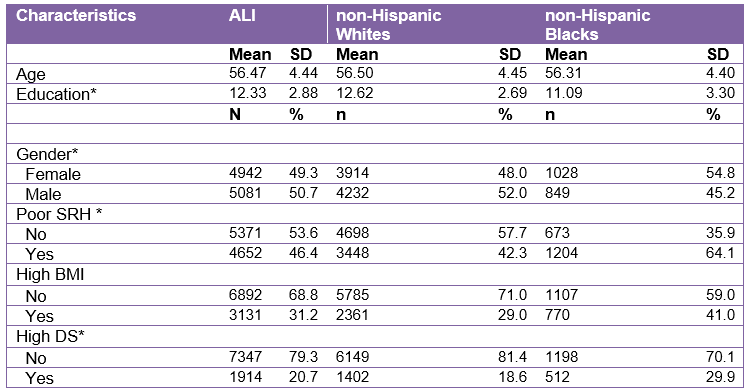