Can we change autoimmunity in Type 1 Diabetes via insulin injection or oral insulin?

This article reviews recent immunotherapy studies of Type 1 Diabetes (T1D) which is an autoimmune disease. Researchers show that injecting human proinsulin peptides can safely modulate the immune system and affect beta-cell function in Type 1 Diabetes, but oral insulin consumption does not reduce the onset of Type 1 Diabetes in individuals at the early stage of the disease.

The incidence of Type 1 diabetes (T1D) is increasing worldwide. The complications resulting from high blood glucose are unavoidable and cause huge burdens on patients and the public health-care system. The need to develop therapies to control and delay T1D progression is urgent. Two recent clinical studies on insulin immunotherapies have shown to modulate autoimmunity and restore immune tolerance. Ali et al. given intradermal injections of human proinsulin peptides to new T1D patients. The treatment is safe, has immune modulation effects, and does not accelerate beta-cell function loss.[1] Greenbaum et al. reported that oral insulin administration cannot delay or prevent T1D in autoantibody-positive subjects.[2]

T1D is an autoimmune disorder involving the immune system attacking the islet beta-cells. The autoreactive effector CD4 T-cells releases pro-inflammatory cytokines. The Treg cells are compromised, and the regulatory autoreactive CD4 T-cells release deficient interleukin-10 (IL-10) to suppress the effector T-cells.[3] The previous antigen-specific immunotherapies (ASIs) have shown some benefits, but balanced efficacy and safety have not been achieved. Therapeutic vaccines have resulted in T1D remission by deleting effector T-cells and stimulating the regulatory effects of T-cells, but clinical outcomes have not been reported.[4] High-dose oral insulin has shown protective immunological effects in a few children at high T1D risk but also has shown adverse effects.[5]

Ali et al. conducted a randomized, double-blind, placebo-controlled peptide immunotherapy (PIT) study. T1D subjects receive intradermal injections according to their randomized groups, as shown in Figure 1. The researchers use proinsulin peptide to represent the epitopes of T1D-related autoantigens. They monitor the subjects for safety, glycemic control, autoantibodies, insulin usage, and glycated hemoglobin (HbA1c). They use insulin dose-adjusted HbA1c (IDAA1c) to evaluate the combined impact of insulin usage and HbA1c.

Greenbaum et al. reported no severe adverse events and no hypoglycemia. They evaluate the effects of oral insulin by the elapsed time from receiving the treatment to T1D diagnosis. As a result, the annualized rate of new T1D onset is similar between the treatment and placebo groups except in secondary stratum 1, as shown in Figure 1. In addition, they report that subjects who adhere to the treatment have a lower annualized rate of T1D onset.

Oral insulin has inhibited T1D development and attenuated islet autoimmunity in young, pre-diabetic mice but has failed to do so in several human T1D prevention trials.[7] Greenbaum et al. reported that oral insulin is not effective in T1D prevention generally. Interestingly, they find that the first-phase insulin release and treatment adherence may affect the results which support further studies on subjects with low first-phase insulin.

In the future, the safety and efficacy of oral insulin are worth to be investigated in Stage 1 T1D with low first-phase insulin release, Stage 2 T1D with abnormal glucose tolerance, and newly diagnosed Stage 3 T1D individuals. Equally important, the protective effects of intradermal insulin in individuals at T1D risk could be evaluated. Genetic background, age at onset, types of first appearing diabetes-related autoantibodies, body mass index, age at recruitment, and gender can be matched between the treatment and placebo groups. Hence, further trials can compare the efficacy of intradermal and oral insulin. The association between phenotype, genotype, and immunomodulatory effects, including induction of clonal anergy or deletion, and induction of regulatory cells or immune deviation can further be studied in subgroups with protective benefits. This may explain the difference between responder and non-responder groups to the treatments.

Injections of human proinsulin peptides have immunomodulation effect which maintains or improves beta-cell functions in T1D patients. Oral insulin intake does not change the annualized rate of diabetes onset in individuals at the early T1D stage. 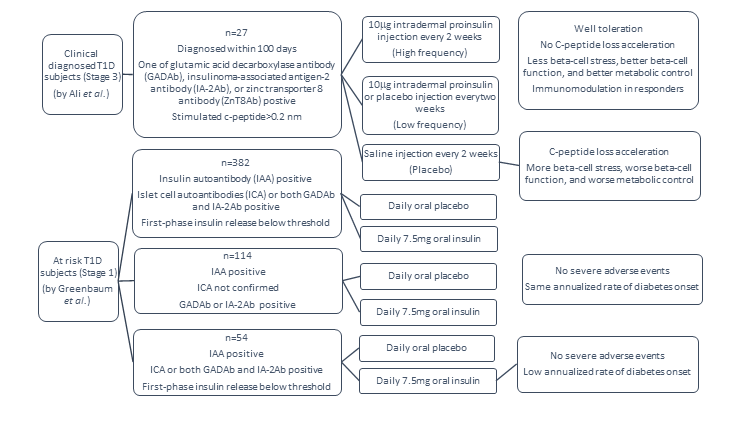