The Typhoid fever often presents with a variety of clinical symptoms and numerous systemic complications. Neurological complications of enteric fever are relatively insidious and rare and many times late and often undiagnosed complication of typhoid fever which can change the course of illness. This is a case of blood culture-proven typhoid fever with neuropsychiatric manifestations responded well with appropriate antibiotics and steroid pulse therapy (1 gram Methylprednisolone for 3 days).
Keywords: Steroids Typhoid Neuropsychiatric

The typhoid fever is a systemic infection caused by Salmonella typhi. Typhoid fever may present with typical clinical presentation of continuous or intermittent fever associated withchills, anorexia, myalgia, headache, abdominal pain, and loose motion or constipation [1] while in some cases these typical clinical features may not be present in all patients and many times, typhoid fever may present in an atypical form of which numerous complications more commonly like intestinal perforation. Apart from intestinal complication, neurological presentation constitutes a vivid and complex component of typhoid fever [2]. ‘Typhoid’ term derived from the Greek word ‘typos’ which means smoke and it was coined this term because of the neurological manifestation like delirium, confusion as a more common presentation of typhoid fever in preantibiotic era [3].The patients with high severity may develop "typhoid encephalopathy" with delirium, altered consciousness, confusion and other neurological symptomssuch as analtered sleep pattern; myelitis, acute psychosis, meningitis, and focal neurological disorders which are extremely rare [4]. Although various theories have explained the role of a possible toxin expressed by the bacteria or direct infection of the central nervous system or a possible autoimmune mechanism but the exact mechanism of the neuropsychiatric manifestations of typhoid fever still remains unclear [5].

A 26-year-old female with no prior comorbidities presented with intermittent high-grade fever of 7 days duration and few episodes of vomiting and watery diarrhea. On clinical examination, the vitals were stable. The general and physical examination were also unremarkable.

His routine hematological and biochemical investigations were sent which was suggestive of leucopenia with neutrophilia and thrombocytopenia, serum electrolyte showed mild hyponatremia while liver function test, renal function test was normal, malaria antigen and dengue antigen were negative and raised C- Reactive Protein level (7.15mg/dl) and was started on iv antibiotics, 3rd generation cephalosporin and metronidazole.

She developed neuropsychiatric manifestation on the 2nd day of hospital stay in the form of hallucination, dissociative symptoms, irrelevant talk and muttering with sleep disturbance. She was disoriented, confused but there was no focal deficit, plantar reflex was bilateral flexor, there was no neck stiffness and kernig's sign was negative.

IV antibiotics fluoroquinolones (Levofloxacin) added and pulse steroids therapy (1 gm Methylprednisolone for 3 days) were administered. She gradually improved within 3 days and was discharged in stable condition with oral antibiotics.

In the current case, our patient developed early neurological symptoms which is what, has been typically described by most of the authors with typhoid encephalopathy occur in the third week of illness in the form of "muttering delirium [6], and also she is having neuropsychiatric manifestation in the form of hallucination, dissociative symptoms with sleep disturbance.

In a study of neuropsychiatric manifestation of typhoid fever reported by Osuntokun et al [6] reported majority of patients, 57% cases have delirium; while a low proportion of patients have bilateral pyramidal signs (3%), transient extrapyramidal signs (1%). mononeuritis multiplex peripheral neuropathy and a few patients (<1%) have late development of post typhoidal psychosis. A study by Wadia et al [7], reported presence of cerebellar ataxia (gait and limb ataxia)as one ofthe most common neurological manifestations of enteric fever; while nystagmus and speech disorders were the least common manifestations. However, in our case, ataxia and other neurological symptoms were not present and more of cognitive dysfunction was observed. We have administered pulse steroid therapy (1 gm Methylprednisolone for 3 days) for the treatment of typhoid encephalopathy in our case which give better and rapid improvement as compared to other steroid therapy which were studied by other small studies which suggested that concurrent high doses of dexamethasone or hydrocortisone may have able to cause improvements in reducing the mortality and morbidity of the patients with typhoid encephalopathy [4, 8]. Moreover, it also has been suggested that a delay in administration of steroids may lead to a higher mortality or a relapse in typhoid encephalopathy [9].

Typhoid fever presenting as neuropsychiatric manifestationsis a neurological complication of this systemic illness. So in patients presenting with high grade fever and encephalopathy symptoms shouldnot be designated febrile encephalopathy and should be evaluated for typhoid fever, especially in tropical countries such as India.Thus, prompt recognition of the typhoid encephalopathy prior to the availability of a bacterial culture report is very important for initiating an appropriate therapy (intravenous steroids along with appropriate antibiotics).

The author(s) declare(s) that there is no conflict of interest regarding the publication of this paper.

The patient had given her consent to publish the case report. 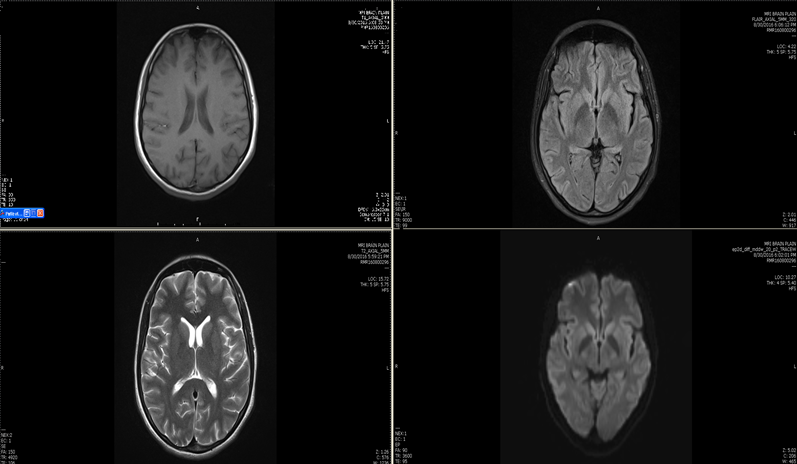