Aim: To report variations in hilar anatomy (arrangement and number) of lungs.

Results: Among 75 adult lung specimens observed, 36 were right and rest left lung. Normal pattern of arrangement of hilar structures was seen in 22 right and 23 left lungs. Rest of the lung specimens (14 Right and 16 Left) showed variations in hilar anatomy. Some of them showed alterations in sequence of arrangement of pulmonary artery, pulmonary veins, bronchus and others in number of these structures. Seven right lung specimens showed only 2 lobes with an oblique fissure dividing them and one left lung showed 3 lobes.

Conclusion: Alterations in pattern of arrangement of structures in lung hilum are quite frequent. A compromise in knowledge of such variations will result in inadvertent intraoperative complications.

A total of 75 adult formalin-fixed cadaveric lungs from the Department of Anatomy, AIIMS, New Delhi, were observed for variations in lobar anatomy. Arrangement of pulmonary hilar structures was meticulously observed. Any deviation in normal pattern of presentation was recorded and documented in the form of photographs. Lungs which exhibited pathological changes at hilar region and mutilations were excluded from the study.

The respiratory system starts developing by day 22 of the intrauterine life when a diverticulum forms as an evagination of the foregut. By day 26–28, the diverticulum immediately bifurcates into two primary bronchial buds. At around 5th week of intrauterine life, the right bronchial bud branches into three secondary bronchial buds and the left bronchial bud branches into two, and by the 6th week, secondary bronchial buds branch into tertiary bronchial buds to form bronchopulmonary segments.[5] In adult, lung pulmonary arteries accompany the airways. Pulmonary veins have a similar number of branches but are separated from airways by alveoli. Pulmonary vessels form in mesenchyme by vasculogenesis. Airways act as a template for the development of blood vessels.[5] Errors in the pattern of pulmonary branching (branching morphogenesis) during embryonic and early fetal periods result in various defects. This ranges from an abnormal number of pulmonary lobes or bronchial segments to the complete absence of a lung. Branching morphogenesis of the respiratory tree is regulated by reciprocal interaction between endoderm and surrounding mesoderm.[5] If mesenchyme in region of bifurcating bronchial bud is replaced by tracheal mesenchyme, then further branching is inhibited. Replacement of tracheal mesenchyme with that of bronchial bud will stimulate ectopic tracheal budding and branching. Branching morphogenesis is under the control of various growth factors such as retinoic acid, transforming growth factor ß, bone morphogenetic protein, and sonic hedgehog protein.

A thorough literature search showed only two recent studies similar to the present one. Hence, the findings of the present study will be compared with these two studies done by Murlimanju et al.[6] and George et al.[7] In the present study, variations in hilar structures anatomy were seen in 38.88% of the right lungs and 41.02% of the left lungs. Similar study was done by Murlimanju et al.,[6]in 2017, and George et al., in 2014.[7] Murlimanju et al.[6] in their study reported 16.1 % of the right and 48.2% of the left lungs exhibited variations of structural arrangement. Similar to the previous study in the present variations in pulmonary hilar structures is seen higher in the left lungs. We also found the prevalence of variable hilar structures is higher in the right lungs compared to the previous study.

Anomalies of lobation[8] may be produced by fusion of adjacent lobes, occurrence of abnormal fissures, or aplasia or agenesis of a part of lung.

Unlike, the hilar anatomical studies variations in lobation were described by quite a few numbers of authors. The results of the present study are compared with previous in Table 2.

Variations in arrangement and number of structures in lung hilum are quite frequent. Most frequent variation is the presence of multiple pulmonary veins. The presence of multiple bronchi is more common in the left compared to the right lungs. Multiple pulmonary arteries are more common in the right lungs. Deviation in normal pattern of the arrangement of structures from lung hilum is common in the right lungs. Variations in lobar anatomy of lungs are not quite common. Details of hilar relations to individual lobes and chief variations are important as individual closure of structures at hilum is preferred to mass ligation during pneumonectomy and lobectomy. Identification of anatomical variation during bronchoscopy procedure would prevent complications such as catastrophic bleeding and inadvertent injuries. Lack of knowledge of the variant hilar anatomy may cause misinterpretation of radiological investigations (X-ray and computed tomography). They can be misdiagnosed as hilar masses.

The present study has certain limitations. Hilar structures were not traced through intrapulmonary tissue which could have added to further knowledge on intrapulmonary branching patterns. The other limitation is the relatively smaller sample size. This has prevented us from performing an inferential analysis. Further larger studies need to be done to fully understand the variations in the population.

The study was performed in accordance to the Declaration of Helsinki and was ethically accepted by the Institutional Ethical Committee. 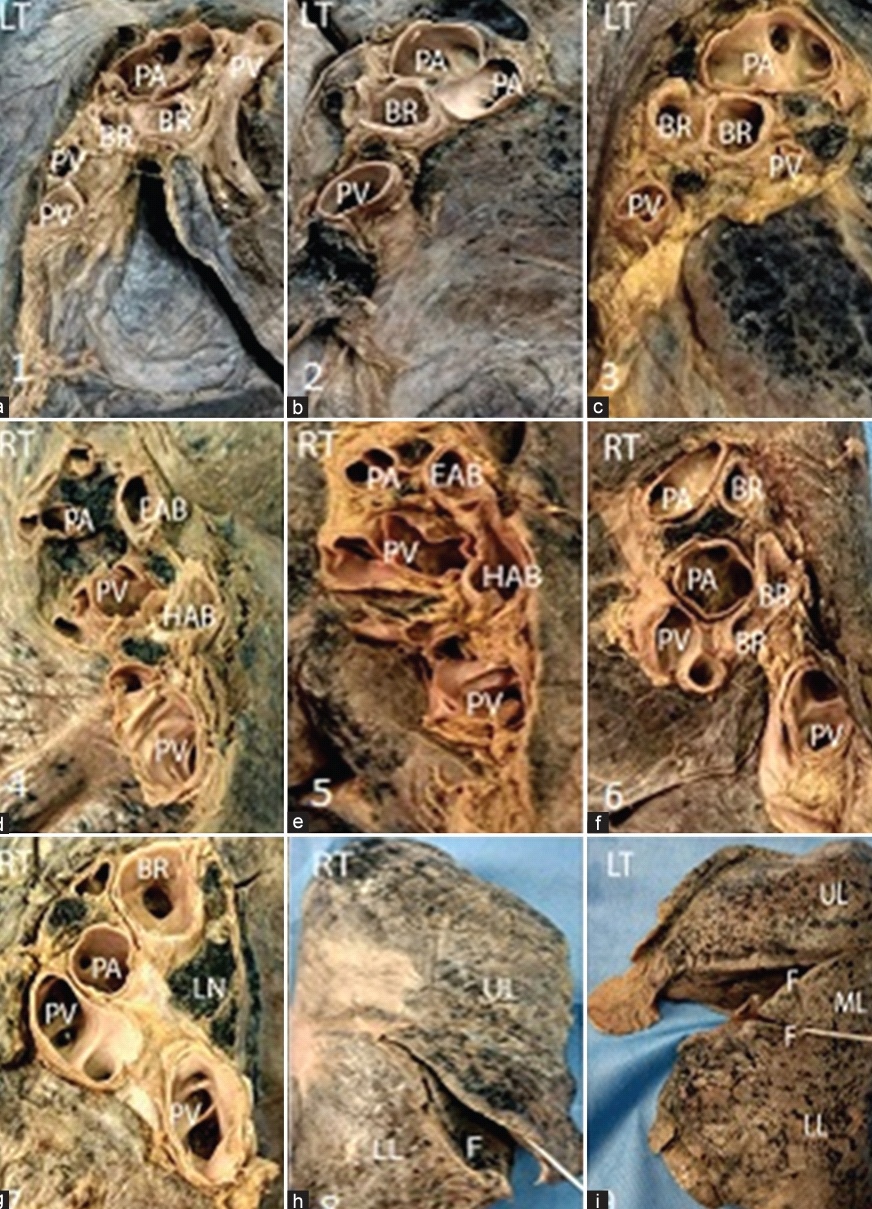