Aneurysmal bone cyst (ABC) is destructive tumor-like benign, expansile and osteolytic bone growth with cyst filled of blood and is rare and unusual in bone like talus [1, 2]. ABCs occur in the metaphysis of long bones though can occur in any bones; rarely occur in feet bones. Current hypothesis supports malformation of intraosseous arteriovenous channel with surrounding periosteum [3, 4].

There are some case reports on ABC of talus in the literature though its rarity. There is no such reports available from Nepal. Here we present a 20 years’ male having aneurysmal bone cyst of talus managed with wide intralesional curettage and autologous bone graft mixed with synthetic bone graft to fill the wide cavity.

Twenty years’ college student presented with pain and swelling of left foot around ankle for six months which increased in last three months. Pain is more in walking and exertion but no complete functional disability of ankle joint. He could go to college and was doing his activities of daily living though there was pain restricting his premorbid sports and outdoor activities. Patient gives history of ankle sprain following which symptom persisted and even in later period its severity increased and presented to this hospital. At presentation his visual analog score (VAS) for pain was 6/10. His clinical examination of the left ankle revealed diffuse bony swelling on lateral aspect, about 2 cm dimension and associated with tenderness. There was mild restriction in dorsi-flexion and planter-flexion in comparison to normal leg. Other history was unremarkable. Systemic examination, distal neurovascular examination and other loco-regional examination and laboratory parameter were within normal range.

Before going to definitive management, we plan to go for biopsy of the lesion and histopathological examination (HPE) report of biopsy specimen showed necrotic bony fragment with fibrofatty tissue and occasional osteoclastic type of giant cells. Keeping the diagnosis as ABC of talus, we plan to go for curettage [Figure 2] and bone graft from iliac crest mixed with bone cement, based on recent management protocol for ABC of talus. Later in post-operative period, the final HPE of curettage specimen revealed cystic spaces with blood-filled cysts, at places lined with giant cells, finding consistent with ABC.

In post-operative period, he was provided with general postoperative care with antibiotic and analgesics. His VAS score for pain was 3/10 in the 7th post-operative day. He was discharged after suture removal in the 2nd week postoperatively and kept under regular follow-up. After surgical intervention, later, he was called on the 6th week postoperatively, 3rd month, 6th month, and 1-year follow-up during which period his pain and discomfort and simple X-ray were [Figures 3 and 4] taken to evaluate graft uptake. His VAS score was 1/10 in the 3rd month, then 0/10 thereafter. It is already more than a year postoperatively and the patient is doing absolutely fine in the last follow-up after a year post-operative.

Ankle and foot tumors though rare pathology it is not uncommon in large tertiary centers. Among these benign lesions are much more common so physicians dealing with foot lesions have tendency to miss malignant lesion in early stage [5]. ABC is commonly encountered pathology, mostly of long bone [3, 6]. Among benign non-tumorous lesion encountered in feet it is not so uncommon in large setting but this entity affecting talus is rare [2, 5, 6, 7]. ABC is more common in young individuals and is supposed to be due to arteriovenous malformation [3, 8].

Curettage with or without autologous or allograft bone graft is common modality but only curettage has high rate of recurrence [8]. Other modalities of treatment includes partial or complete talectomy, curettage with cauterization following bone cement to fill the cavity etc [7, 9, 10]. Though there are various options superiority of outcome of one over another has not been studied at due to the rarity of the case. Though in our center there is availability of arthroscopic facility in present days, but we less frequently perform arthroscopy of ankle joint. In this case due to thin cortex separating the cyst from the ankle joint, arthroscopic approach is not tried here.

Though ABC of talus is rare benign lesion it can be present in any health care facility. The imaging modalities with the help of pre-operative biopsy can help to reach the diagnosis. Curettage of the lesion with autologous bone graft with or without synthetic bone is the convenient option for the management with functional recovery.

We would like to acknowledge our patient who was focus of the study and all hospital staffs who have contributed for care of this patient.

The signed consent was taken from the patient and the study has been approved by the institutional (IRC-NAIHS) ethical clearance committee. 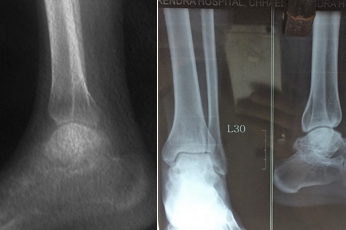 Journal of Medical Research and Innovation, 2018.

This work is licensed under a Creative Commons Attribution-NonCommercial-NoDerivatives 4.0 International License.