Hydroelectrophoresis for Transdermal Administration of Verapamil or of Hyaluronic Acid in Peyronie's Disease: A Prospective, Open Label, Multicenter Study

Aim & Objective: To assess the efficacy of a new electromotive system for the transcutaneous delivery of verapamil or of hyaluronic acid to improve the symptoms of Peyronie' s disease (PD) in patients with a curvature deformity of < 30° at the beginning of therapy.

Methods & Materials: Sixty-one PD patients were studied. Thirty were randomly assigned to receive verapamil 10 mg/session (Isoptin®, BGP Products, Rome-Italy), (Group 1, median age 56 years, range 49-62), and 31 were randomly assigned to receive hyaluronic acid 8 mg/session (Sinovial®, IBSA, Lodi-Italy) (Group 2, median age 58 years, range 51-56). There were ten sessions, 2 sessions/week for each drug. Each drug was transdermally administered using the hydroelectrophoresis technique and carried out using a Hydro4and apparatus (Swiss4Med SA, Morbio Inferiore, Switzerland). With respect to the efficacy of the drugs studied, the endpoints were: side effects, pain, erectile function, penile deviations and plaque area (cm2) before, and 3 and 6 months after drug administration. The differences were assessed using the Mann-Whitney Rank test (unmatched groups) or using the Wilcoxon Signed Rank test (matched groups). The differences between the groups in terms of side effects were assessed using the chi-square test.

Results: No significant difference emerged among the baseline values of the two groups. Pain, erectile function, plaque area and penile deformity significantly improved in both groups after treatment, but a notably higher improvement occurred in the patients in whom hyaluronic acid was administered. Only a few negligible side effects occurred in the Group 1 patients treated with Verapamil, with no significant difference between the groups.

Conclusion: Administration of both hyaluronic acid and verapamil using the Hydro4and apparatus is a safe and efficient method for PD therapy.

Peyronie’s disease (PD) is a disorder of the penis characterized by plaques of fibroblast proliferation/fibrosis located in the tunica albuginea. The plaques may cause a variety of deformities. Pain and erectile dysfunction may be accompanying symptoms [1]. Originally, PD was regarded as a phenomenon which spontaneously resolved itself; however, more recent studies have indicated that few or no patients experienced disease resolution whereas, in a large majority of patients, the disease worsened [1, 2]. Peyronie’s Disease might be considered a tumor-like disease [3]; thus, effective conservative therapy might be particularly welcome in the early stages of the disease.

Intralesional injection therapy with Collagenase Clostridium Histolyticum (CCH) has been approved by the U.S. Food and Drug Administration for the treatment of adult men with PD having palpable plaques. The severity of the side effects (penile hematoma and/or corporeal rupture) and high costs have limited the use of CCH for a curvature deformity of ≥30° at the beginning of therapy [4].

This means that a number of PD patients still require non-CCH medical therapy capable of eliminating or improving PD symptoms.

Intraplaque injection of hyaluronic acid recently showed a higher efficacy than intraplaque verapamil in improving plaque size and sexual function in PD patients [5]. Intraplaque injections are painful, may provoke hematomas, and a consistent number of patients have refused the treatment [6].

These data prompted us to test a new electromotive system for the transcutaneous delivery of verapamil or of hyaluronic acid in a prospective open trial with the purpose of improving PD symptoms in patients with curvature deformity of < 30° at the beginning of therapy.

This was a prospective multicentre study. All patients complaining of untreated/undiagnosed PD were considered for inclusion in the study. These patients were enrolled between 2nd January 2014 and 30th September 2017. Peyronie’s Disease is defined by the presence of plaques in the tunica albuginea of the penis; the PD was diagnosed based on medical history, physical examination, and basal and dynamic duplex scanning of the penis [i.e. after intracavernosal injection of Alprostadil (PGE1) 20 µg] [6].

Objective information pertaining to the nature and magnitude of the patient’s penile deviation was obtained using an intracavernous injection (ICI) with 20 µg of Alprostadil (PGE1). A second injection was planned to be administered if necessary to achieve full erectile response, but this was never necessary since all patients were able to achieve full rigidity with the first ICI. The penile deviations were assessed on the basis of photo archives gathered in the outpatient clinic using the Kelami method [7] and calculated using a paper protractor [8].

The following parameters were assessed prior to intervention: pain on erection using a visual pain scale of 1-10 [9], satisfaction with vaginal penetration according to the International Index of Erectile Dysfunction (IIEF)15 scale score [10], penile deviation (in degrees) [7] and plaque size (cm2) as assessed using ultrasonography + ICI PGE1, 20 µg. In the case that more than one plaque was present, the total size and volume of all plaques were recorded in each patient [2]. The same parameters were again assessed 3 and 6 months after the end of the interventions [6]. The acute and chronic side effects of the treatments were assessed as well.

All patients in whom PD could be diagnosed were considered candidates for the present study. A power analysis was carried out to estimate the number of observations required to have a reliable chance of detecting the effect sought. There are no formal standards for power (π); the power of our tests used π = 0.90 as a standard for adequacy [11]. The calculations were carried out using the G*Power3 program [12].

Randomization was carried out using an on-line randomizer: https://www.randomizer.org/. The patients were randomized into two groups, the first receiving verapamil 10/mg session, 2 sessions/week for ten weeks and the second receiving hyaluronic acid 8 mg/session, 2 sessions/week for ten weeks. Blindness could not be insured because the mixture gel + drug is best used immediately after preparation, and the mixture was prepared by the researchers since no nurse was available. The majority of the papers in which verapamil was used for PD' used 10 mg of the drug [5, 13, 14].

The dosage of the hyaluronic acid was assessed on the basis of previous preparation tests, carried out by collecting data on a visual pain scale score, an IIEF15 scale score [10], penile deviation (in degrees)7 and plaque size (cm2) as assessed using ultrasonography + ICI PGE1, 20 µg before and after hyaluronic acid administration. One vial/session was administered to one group of ten PD patients and two vials/session were administered to another group of ten PD patients. Two sessions/week for 5 weeks were carried out for each patient. Since the visual pain scale score, the IIEF15 scale score, penile deviation and plaque size were equally improved in all patients in both groups, a dosage of one hyaluronic acid vial/session was adopted.

Hydroelectophoresis was performed using a Hydro4 and apparatus (Swiss4Med SA, Morbio Inferiore, Switzerland) [Figure 1]. Briefly, hyaluronic acid 8 mg (one 1 ml vial) (Sinovial® Mini 0,8 %; IBSA, Lodi, Italy) or verapamil 10 mg (Isoptin®, BGP Products, Rome-Italy) were combined and mixed in one bottle containing 10 ml specific gel (hydro4gel™). The mixture hydro4geland drug was placed within a special polarization chamber (ROLL-ON). The apparatus was set at the appropriate level “Severe Peyronie Disease”, and the polarized chamber was rolled up and down on the flaccid penis in correspondence of the plaque until the polarization chamber was empty [15]. The procedure was repeated twice a week for 5 weeks.

With respect to the efficacy of the drugs studied, the endpoints were: side effects, pain grade, IIEF15 score, penile deviations and plaque area (cm2) as assessed using ultrasonography + ICI PGE1, 20 µg.

Sixty-six patients were eligible for participation in the study; 32 were randomly assigned to receive verapamil (Group 1) and 34 hyaluronic acid (Group 2). Two patients in Group 1 violated the protocol, and 3 dropped out from Group 2. A phone call indicated that, in 2 cases, a transfer of residence had occurred and, in the last case, there was a couple conflict. Thus, 30 patients treated with verapamil 10 mg and 31 treated with hyaluronic acid 8 mg were studied.

[Table 1] shows the baseline demographic and clinical characteristics for each group. No significant differences emerged.

Data are shown as median values, and the ranges are in parentheses. The differences between the unmatched groups were assessed using the Mann-Whitney Rank test, and the differences between before and after (matched groups) therapy were assessed using the Wilcoxon Signed Rank test, each test corrected for the number of samples delivered (two samples). The side effects were recorded as well and were compared using the chi square test. Keys: *Two patients had mild hypotension; V/s = versus

The endpoints of this study were to ascertain whether hydroelectrophoresis could be an efficient and safe system for administering drugs for PD. As a matter of fact, the transdermal administration of both hyaluronic acid and verapamil using a Hydro4and apparatus led to an improvement in PD symptoms, and hyaluronic acid proved to be more efficient than verapamil in both reducing curvature, pain and plaque area, and in improving erectile function. The fact that only a few negligible acute side effects occurred prompted us to further sustain that the Hydro4and apparatus is a safe system for transdermally administering drugs.

Verapamil alters the fibroblast production of extracellular matrix macromolecules, inhibiting exocytosis of the extracellular matrix; it inhibits the expression of collagen and increases the proteolytic activity of collagenase, thereby enhancing matrix remodeling by human fibroblasts. It also affects the cytokine expression associated with the early phases of wound healing and inflammation and possesses a profound inhibitory effect on cell proliferation [17].

This paper has three biases:

The first was that no placebo was used. As a matter of fact, it was quite impossible to find a placebo substance for PD because even the intralesional administration of a physiologic solution significantly reduces plaque size [17-19].

The second was that the Authors were unblinded to the drug used. However, pain and sexual function assessment were carried out by administering a validated questionnaire to the patients; thus, the results of the therapies were evaluated by the patients themselves. Additional plaque area and penile deformity assessments were carried out using objective methods (photography, dynamic Duplex and paper protractor) in order to reduce the influence of the Authors as much as possible.

The third was that no branch made up of untreated patients was tested. Currently, the Helsinki declaration of human rights (http://www.partecipasalute.it/cms/files/Dichiarazione%20di%20Helsinki.pdf) precludes the possibility of not treating patients when they are recognized to be affected by a progressive disease, and PD is a progressive disease in the majority of the cases [1, 2].

As a conclusion hydroelectophoresis performed with a Hydro4and apparatus is a safe and efficient method for delivering transcutaneous drugs to relieve PD symptoms. 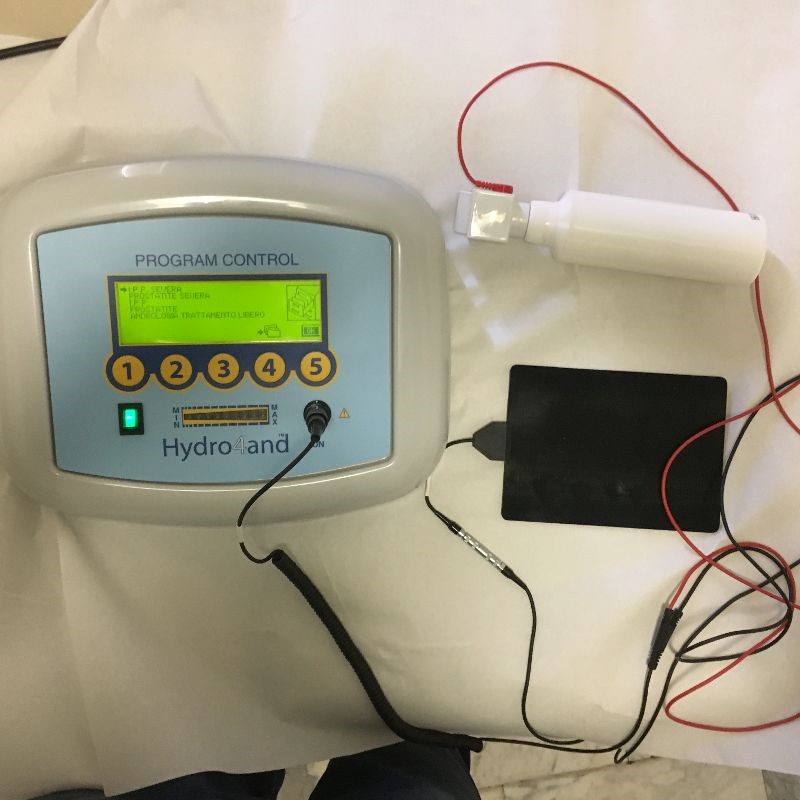