Letter to the Editor

Multiple myeloma (MM) is a neoplastic plasma-cell disease known for its infiltration of malignant plasma cells in the bone marrow accompanied by multi-organ dysfunction. The median age at diagnosis is approximately 70 years [1]. Less than 2% of the patients are younger than 45 years of age at diagnosis [2]. MM may present as a diffuse disease of the bone (myelomatosis), or may be as a single plasmacytoma of bone or as an extramedullary plasmacytoma (EMP). The very common thoracic involvement by MM is the bone involvement or infiltration of the lungs secondary to an infection. Although, the pulmonary parenchyma is quite a rare site of extra medullary involvement in MM patients, Interstitial lung disease (ILD) as a pulmonary manifestation of MM is even rarer. Only few proved cases have been reported in the literature so far. Therefore, we present a rarest case possible of a multiple myeloma presenting as ILD.

A 40-year-old female with a past history of hypothyroidism and hypertension had presented to the hospital with dyspnoea, neck pain, and vomiting. Her dyspnoea worsened on exertion, with no positional variations, no nocturnal/diurnal variations and was not associated with any chest pain. She was having around 5-6 vomiting per day which was non-projectile, non-bilious with the absence of blood in vomiting and was also afebrile. On physical examination, she was afebrile, pale, tachypnoeic (22/min), tachycardic (104 beats/min) and with the presence of bilateral basilar crackles.

Serum Beta 2 macroglobulin was 3143 mg/dl. Thus, the diagnosis of multiple myeloma with myeloma cells infiltrates in lung showing ILD pattern was made.

The patient responded significantly well to the treatment with improvement. After 4 cycles of chemotherapy, Plasma protein electrophoresis showed a decrease in M spike (0.80 g/dl) [figure 6].

Patient is currently under regular follow up since 2 years with no new complaints.

Multiple myeloma presenting as ILD has been documented in very rare occasions till date. Interestingly, MM has a potential to involve the thorax through various ways, but the involvement of the pulmonary parenchymal is rather rare. In literature, it was observed that MM’s thoracic manifestations included abnormal skeleton structure, pleural effusions, diaphragmatic dysfunction because of peripheral neuropathy and plasmacytomas.

In a review conducted by Kintzer et al on 958 patients with multiple myeloma, the thoracic manifestations were specifically reported [3]. The most common manifestation was osteolytic lesions of ribs or vertebrae’s which was observed in 267 (28%) patients followed by pulmonary infiltrates {95 patients (10%)}. Otherwise, the pleural effusions were also present in 58 patients (6%) while extramedullary plasmacytomas were observed in 11 (1%). Only 4 patients from this study showed diffuse infiltrates which was thought to be caused by plasma cell infiltrate (proven in only one case). This explains the rare phenomenon of interstitial lung disease in case of multiple myeloma. In the present case, the observed diffuse infiltrates throughout the lung fields were also caused by plasma cells. A similar presentation of multiple myeloma as interstitial lung disease was reported in a case by Ada Tin Wei Ma et al [4] and Nitu et al [5].

Standard medical management of symptomatic MM involves chemotherapy with or without an autologous stem cell transplant for patients under the age of 70 [6]. Intravenous administration of bisphosphonates are used in conjunction with chemotherapy and have been shown to decrease the progression of osteolytic lesions. Bisphosphonate treatment is recommended for patients with radiological evidence of osteolytic lesions or osteoporosis and is continued monthly for a period of 2 years [7]. Supportive therapy for patients with MM may include maintenance of fluid and electrolytes with regular hydration, erythropoietin and transfusions to replace red blood cells and platelets, pain control using analgesics (NSAIDs are contraindicated due to potential for renal complications), promotion of mobility to prevent osteoporotic fractures, spinal decompression surgery for spinal complications, and radiation therapy for focal skeletal lesions [8].

Lung involvement and pulmonary infiltrates are not common in a case of MM. Most of the time we suspect lung infection. MM should be taken into consideration in the differential diagnosis of pulmonary infiltration in patients with MM. The possibility of myelomatous pulmonary infiltrates should be suspected in the absence of fever, failure to respond to antibiotics and resolution to myeloma treatment. Analysis of BAL fluid and lung biopsy for the presence of plasma cells and IHC provides a means of establishing the diagnosis. Pulmonary involvement indicates aggressive nature of disease. Treatment of MM along with supportive care should be started at the earliest in these cases 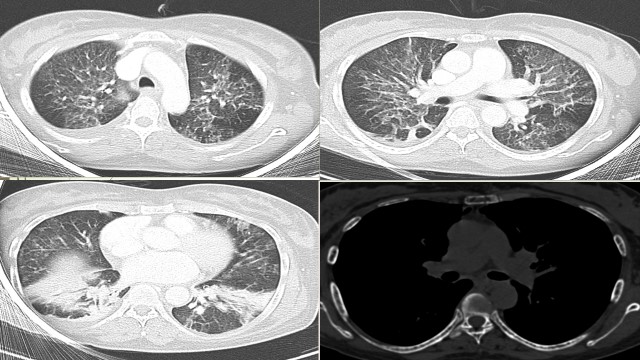