Centre for the Rehabilitation of the Paralysed (CRP)

Centre for the Rehabilitation of the Paralysed (CRP)

Background:  Spinal cord injury (SCI) is a life threating condition which has a profound impact in the morbidity and mortality. SCI causes lifetime sufferings and mostly occur among the young adults. Not only in Bangladesh but also worldwide, SCI is a devastating and burdensome condition. This research was conducted to see the demographic profile of SCI patients in Bangladesh.

Methods and Materials: This is a retrospective analysis where data was collected from medical records of all SCI patients admitted in between January 2012 to December 2014 from Centre for the Rehabilitation of the Paralysed (CRP), Savar.

Conclusion: The data is collected from a tertiary level of rehabilitation centre where extensive demographic data was not previously represented. In many developing countries SCI is neglected, poorly managed and deprived from society. In addition, the present study suggests that demographic factors may affect the characteristics of SCI.

In South- Asia region Bangladesh is a developing country, with a burden of a large population which is about 160 million [1, 2, 3]. Population growth rate of Bangladesh per year 1.59 percent which includes in urban area 27% and in rural is 73%. Bangladesh is a densely over populated country where literacy rate of about 61.0% among the age of 15 years and above [4, 5]. Not only in Bangladesh but also worldwide Spinal cord injury (SCI) is a devastating and burdensome life threating condition which has a profound impact on the morbidity and mortality (1, 6, 7). SCI affects mostly young and middle-age adults, and recovery depends on the type and severity of lesion, rehabilitation time, and individual performance how effectively he/she completes every day task [8, 9]. Globally a trend has been observed that most of the traumatic spinal cord injuries occurred by fall from height or either road traffic accident [1, 3, 5]. Spinal cord injury from traumatic or non-traumatic both has a profound impact on many factors like physical, mental, domestic and social life of an individual [1, 5]. There are different type of secondary complications usually suffered by spinal cord injured patients among them pressure sore, urinary complications, sexual dysfunctions, bowel bladder problems are main among them some are preventable and some are need re-hospitalization and eventually it lead to a great deal of disability, morbidity, degree of dependence and mortality [5]. Different study has been conducted in developing and developed country to find out the cause and characteristics of SCI and it seems that it depends on geographic area and socioeconomic status. Life expectancy after SCI is markedly reduced due to secondary complication, severity of injury, social deprivation and lack of proper rehabilitation [6, 7] Evidence from 2011, Cripps et al showed global prevalence of SCI was 236 and 1,009 per million which was similar to a result found in 1995 by Blumer and Quine (about 110-1,120 per million of population) [10]. The current study was aimed to look into the demographic profile of spinal cord injury patients and also try to find out the impact factor of cause of injury in different division of Bangladesh which will help us to identify the etiology, risk factor and preventive measure.

Formal permission was taken from the physiotherapy department of Bangladesh health professions institute (BHPI) as it was an academic institute of Centre for the rehabilitation of the paralysed (CRP). At the beginning of data collection, permission was obtained from the concerned authorities ensuring the safety of the participants. All information was kept in secure. Confidentiality of the person and the information was maintained and observed and unauthorized persons did not have any access to the collected data.

Data were collected from all admitted patients to the CRP in between January 2012 to December 2014. Patient with complete information is included in this study. Patients with incomplete information and those who are discharge on request bond (DORB) are excluded. Data that were recorded consisted of age, sex, mode of injury, diagnosis, skeletal level and American Spinal Injury Association (ASIA) Impairment Scale (AIS) [11]. Recovery was categorized as a complete and incomplete lesion. Etiology of injury was categorized into different groups like fall from height (FFH), road traffic accident (RTA), heavy object fall over head/back, are the leading cause and shallow diving water, scarf injury, bull attack, physical assault are the diverse cause. Non-traumatic causes like tuberculosis of spine (TB), transverse myelitis (TM) are associated causes of spinal cord injuries.

After managing data properly, it was analyzed in SPSS (Statistical Package of Social Science) 16 version and Microsoft Excel Software 2007 version.

Figure 2 depicts the geographical location of persons with SCI in the study. A total of 38.9% (456) of the persons with SCI were from the urban areas whereas 61.1% (716) were from rural areas. In this study among eight division most vulnerable were Dhaka 33.2% (389) then Khulna 20.4% (239). Fall from height is the major cause of SCI and second most common is Road traffic accident (Figure 2).

Demographic studies have been conducted but the information from these studies may not be representative of the country. There is no structured health care delivery system for spinal injuries in Bangladesh. Bangladesh has not had any registry or proper demography study so far. People having spinal injury can go to any hospital of their choice for management. In this study gender, age, place of habitat and marital status were taking into consideration as demographic variables. Our study found that 86.2% (n=1010) were male and 13.8% (n=162) were female and this is usual because majority of women work remain in the home while men are exposed to work in outside activities and this result is similar with previously reported in both local [5, 13] and global [14, 13, 15] study. Most of our SCI patients are young adult injured in the second decade and third decade of life which was different from Hossain et al.’s study where the mean age was 47.44 years [16] and goel et al.’s study where the average age was 46.65 ± 16 years [6] and similar with Ulrich et al.’s study who found the mean age to be 36.1 years [17]. In our country the main cause of SCI is the fall from a significant height whereas in other countries like India, the main cause is RTA [18]. Our study is reveal that SCI is more prone to rural area rather than in urban area about 61.1% of the respondent was from rural area which is similar to Rahman et al. and Hoque et al. [1, 19]. Majority of the participants of this study had traumatic paraplegia (52.3%) and the principle cause was the fall from height (45.8%) due to large number of people connected with fruit harvesting which is important part of our agricultural economy in our country [19] and road traffic accident (24.7%) which was found to be consistent with other global literatures [13]. Scarf injury 1.1% (n=13) and bull attack 2% (n=24) are new cause of SCI where the scarf injury causes severe type of sufferings for patients with SCI which was not previously reported. Most of the SCI patients with complete spinal cord injury evident by category A in ASIA scale was noted as 60.9% which is common with Sridharan et al., Hoque et al. and Islam et al. [15, 19, 20. Most exposed trauma area of Spinal cord injury noted as C1-C7 about 30.70% (n=359) which is common with Hoque et al. [19]. The division wise distribution of person with spinal cord injury in our study revealed fall from height was the major cause {14.84% (n=174)} while the second most common cause was road traffic accident {8.95% (n=105)} in Dhaka Division whereas injury due to bull attack was a major cause of SCI in Khulna (1.02%) while bullet injury was major in Chittagong (0.34%) which are also not reported previously in Bangladesh.

In many parts of the developing world, SCI is neglected, socially deprived and poorly managed. The demographics pattern of SCI in the developing world is different from the developed world due to extensive research sparse and data is missing. The data collected from a tertiary level of Rehabilitation centre where demographic data was not previously represent and this data mostly represent Bangladeshi population. If it is possible to further exploration like national survey with expansion of this data can be the good statistics for government legislation and for prevention of SCI.

Acknowledgments: The Authors thank to Md. Ahnaf Al Mukit for his help in data arrangement and Ecommerce Research Project 2020 for their support.

Data Archiving: There were no data to deposit.

Conflict of Interest: The authors declare no conflict of interest. 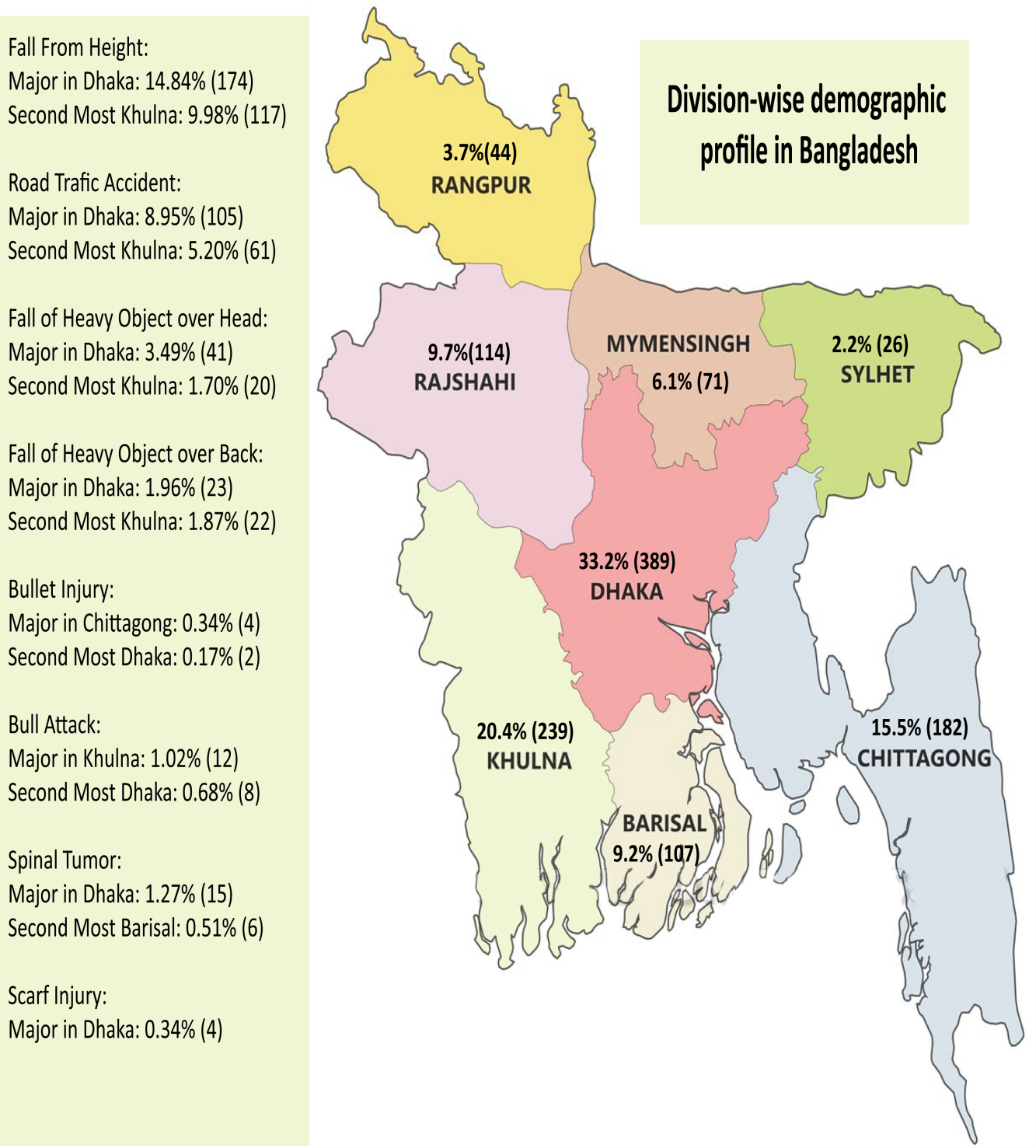