Presentation with Personality changes and Tinnitus to a Vascular Intervention: Rare case of Carotid Body Paraganglioma

Case Report: A healthy smoker technician by profession was brought to the emergency room (ER) with coprolalia. The general physical exam did not reveal any information. His history revealed unilateral tinnitus and odynophagia leading to a consultation by the neurologist with head imaging. Acoustic neuroma was ruled out and the caregiver was asked to elaborate the events mentioned in the history and a psychiatric examination was done. The personality changes were evaluated by the psychiatrist that showed overlapping of delirium and depression. The patient was further examined by a vascular surgeon. After careful revisiting of the history, examination and indication of tender mass in the neck by the patient's vascular surgeon, the diagnosis of carotid body paraganglioma was made which was followed by surgical resection for treatment.

Conclusion: Carotid Body Paragangliomas are very vascular structures and their manipulation in a surgery setting requires expertise. This case presented with personality changes and tinnitus, a very less likely event to occur in a carotid body tumor. The present care report, thus adds on to the literature of carotid body tumors and its presenting symptoms.

Carotid body tumors also known as chemodectoma or paraganglioma, are highly vascular glomus tumors that originate from paraganglion cells of carotid body originating at the bifurcation of the carotid artery [1]. The present literature describes three types of carotid body paraganglioma; familial, sporadic and hyperplastic [2]. They attune respiratory and cardiovascular system (CVS) functions when there are changes in po2, pco2 and blood pH [3]. These are treated surgically and with radiotherapy when surgery is not possible [4]. These tumors usually present with palpable neck mass, hoarseness of voice, vision changes, high blood pressure and numbness in tongue. The present case put forward a case report of a patient with tinnitus and neurological symptoms, including personality changes, which is a very rare presentation indicating the diagnosis of carotid body paraganglioma.

A 44-years-old healthy male smoker working in an industrial facility as a technician (Height: 5’ 7”, Weight: 74 kg, BMI: 25.5) presented at midnight in the emergency department with coprolalia, jumbled conversation, and screaming episodes. The emergency physician carried a general physical exam and evaluated for focal neurological signs, which were negative. On further history from the patient’s caregiver, it was known that the patient had changes in sleeping patterns and used to avoid social gatherings for past one month. Prior to this event, almost three months back, the patient complained of unilateral tinnitus, odynophagia and discomfort in the neck. For these symptoms, an otorhinolaryngologist consult was asked which led to a provisional diagnosis of acoustic neuroma. After consult with the neurologist and head imaging, the patient was clear of any condition or disease and the possibility of neuroma was ruled out.

The patient was shifted from emergency service to an indoor facility and was planned for re-evaluated in the morning. After considering the past medical symptoms, the patient was again asked about the tinnitus, on which patient stated it as a “continuous annoying ringing in right ear”. On asking about alleviating or aggravating factors, the patient stated it as, “in morning it's better but at work its unbearable”. Regarding odynophagia, the patient told that swallowing solids is more painful than liquids and it has been undulating since the beginning. On asking the discomfort in the neck, patiently pointed a tender site. The caregivers were questioned about various personality changes, about which it was revealed that patient had extreme personality changes which ranged from conversing with a rude language, social withdrawal, spells of forgetfulness and multiple episodes of wakefulness in the middle of the night. The patient was also found roaming around the house at odd times. After history, patient’s systemic examination was carried which did not show any focal abnormality, although the patient was found to be having a high blood pressure 144/98 mmHg with a heart rate of 87/min. Thus, a psychiatric consult was planned.

Initially, the diagnosis of delirium overlapping with depression was made by the psychiatric evaluation and the case was forwarded to the academic board for an expert opinion. Although, the patient was conscious and but not well oriented in time and space. Psychiatrist’s opinion also suggested that the personality changes may not be associated with any major lesion in the brain but a possibility of low perfusion of certain focal areas can be associated with such symptoms. It was difficult for a particular psychiatric condition so further evaluation was requested. On careful re-evaluation of the symptoms, a vascular surgeon consult was requested, which led to magnetic resonance angiography (MRA) and extensive head and neck imaging of the patient. The figure 1 shows sagittal section of computerized tomography (CT) scan revealing a tumor-like mass on the bifurcation of the carotid artery on the right side with compression of the vascular lumen (15.5 x 31.5 x 34.8 mm).

The figure 2 shows the MRA that helped us explain the vascular nature of the tumor and extent of the growing structure. These images helped in the final diagnosis of carotid body paraganglioma that was relatable with high blood pressure and the probable site of the presence of glomus cells, the primary site of this tumor.

Considering patient’s incapacitated state, the consent was taken from the patient’s wife for a surgical intervention. A vascular surgeon intervened and the patient was held in a supine extended neck position. The surgeon retracted sternocleidomastoid laterally and omohyoid medially. The bifurcation of the common carotid was visualized with a hard mass at the site. Vascular looping was done for the vessels and the tumor was located and excised. The figure 3 shows the technique of approaching this tumor mass and removing it by careful manipulation around this mass. The extracted sample was sent to the pathology for histological analysis, that later confirmed it as a paraganglioma or more popularly known as carotid body tumor. The patient was kept under observation and the caregivers were advised to have a follow-up in a month.

These tumors are an asymptomatic palpable neck mass present within the anterior triangle of the neck. On examination, these masses are typically vertically fixed at the bifurcation of the common carotid (Fontaine sign). It is well established that the gold standard curative treatment is surgery for carotid body tumors. The first of this kind of intervention was performed by Albert in 1889 with a more focused subadventitial dissection reported by Gordon-Taylor in 1940 [5, 6]. Carotid Body Tumors are slow-growing hypervascular tumors that arise from paraganglionic cells and have chemoreceptor organ in it. The most common site of these tumors is at carotid bifurcation, foramen jugular, middle ear cavity and in cervical portion. It is recommended that a complete resection should be performed because there is an incidence rate for malignant degeneration to as high as 10% and in case of bilateral or multiple masses, a staged approach is recommended instead of simultaneously excising it to reduce the neurologic damage and cerebrovascular complications [4, 7]. In our case, the site was very similar to the published data and with the help of the imaging, diagnosis was possible. Carotid bifurcation is the site for paraganglioma and a very characteristic imaging of the tumor is seen in it. But the presentation was very unique for this case, first, that tinnitus isn’t reported in the literature for carotid body paraganglioma, although it is a basic symptom for these tumors presenting at jugular vein or in the middle ear cavity due to obvious anatomical location. Presentation with tinnitus for this site is less likely and there is no report in literature similar to it. Secondly, an association with personality changes is not yet known. There is an ample neurological evidence that suggests the presence of foci in the brain that manage our behaviors, conscious and unconscious perceptions but its connection with a carotid body paraganglioma is unique and unheard of. The patient had spells of forgetfulness that may sign towards inadequate blood perfusion to the memory centers but with abusive conversation and social withdrawal which are new to us. This case was unique to be presented with personality changes. Generally, the low perfusion of certain brain areas may be associated with this process but there is no strong evidence that can actually suggest this process. Although it was evident that no particular organic cause can be associated with tinnutis or personality change, this is important to remember that these tumors often surprise us by presenting with such new symptoms.

Overall, the presentation of these tumors and treatment plans are extensively seen in the literature but our case is unique of its kind, showing the presentations that are very less likely to happen. It is the first reported case of a paraganglioma of carotid body, presenting with such symptoms.

Carotid Body Paragangliomas are very vascular structures and their manipulation in a surgery setting requires expertise. Also, the diagnosis requires imaging, preferably a CT scan and angiogram to see the extent of the tumor and plan the surgery accordingly. Its presentation usually ranges from a palpable neck mass to other visual symptoms and blood pressure changes. This case presented with tinnitus, which is very less likely to happen in a carotid body tumor and personality changes, which are also not explainable. The report thus adds on to the literature of carotid body tumors and its presenting symptoms.

Disclosures and Conflict of Interests: None to Declare

Permission and Consent: A written consent was taken from the patient. The consent mentioned that none of the information pertaining to identity will be shared and the only purpose of preparing a manuscript from this information is for academic purposes only. The consent along with the manuscript was submitted to the Ethical and Institutional Review Board of FMH College of Medicine for final review. No discrepancies were found and was allowed for a journal submission. 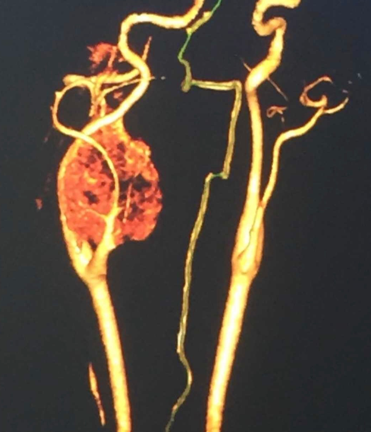