Objectives: Despite our knowledge on the effect of cognitive test score on subsequent risk of mortality, few studies have compared Blacks and Whites for this association. The current study was conducted on Black-White differences in the magnitude of the association between baseline cognitive test score and all-cause mortality in a nationally representative sample of adults in the United States over 25 years.

Methods: We used data of the Americans’ Changing Lives Study (ACL), 1986 – 2011, a national prospective cohort in U.S. The study followed 3,361 adults (2,205 White and 1,156 Blacks), age 25 and older, for up to 25 years. The independent variable was cognitive test score measured at baseline (1986) using the 4-item version of the Short Portable Mental Status Questionnaire, treated in two different ways (as a dichotomous and as a continuous variable). The dependent variable was time to death (due to all causes) during the follow up period. Covariates included baseline age, gender, education, income, number of chronic diseases, self-rated health, and depressive symptoms. Race (Black versus White) was the focal effect modifier. We used a series of Cox proportional hazards models in the total sample, and by race, in the absence and presence of health variables.

Conclusions: In the United States, baseline cognitive test score has a weaker protective effect against all-cause mortality over a long period of time for Blacks than Whites. The finding is in line with the Minorities Diminished Returns theory and is probably due to structural and interpersonal racism. 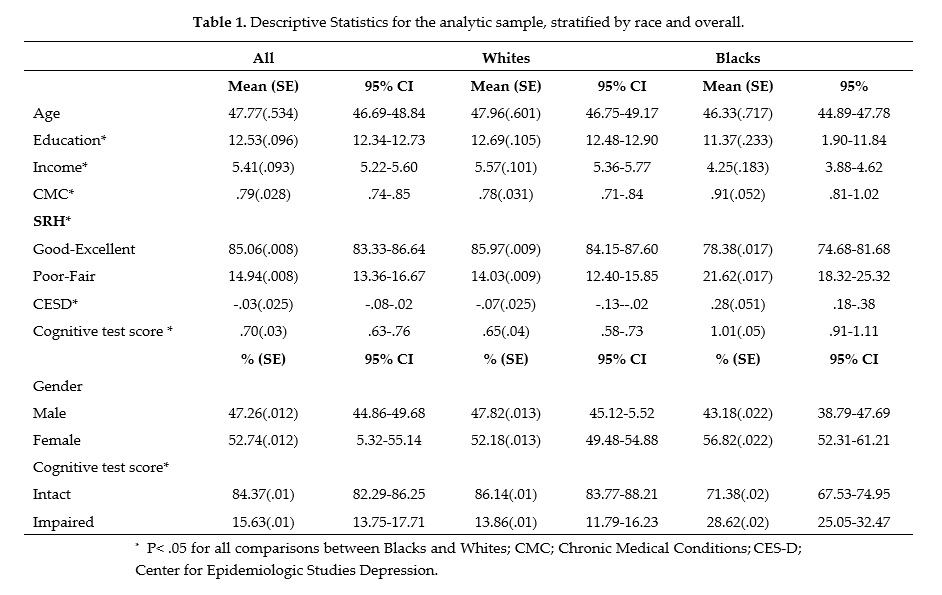